Nearly all parents have had to comfort their children after they have experienced a nightmare during the night, but not all of them are nightmares and in some cases your child cannot be comforted.

It is estimated that around three to twenty percent of children will suffer with night terrors which usually start at a much earlier age than the more common nightmares.

If your child has just started having night time terrors, then it can be quite frightening and upsetting for the parents of children, especially as they can look a little bit like a disturbing scene from a supernatural horror film is taking place right in front of you.

Night terrors are perfectly harmless to the child, but it can be very frustrating for you, especially if you're constantly having your precious sleep patterns broken up, and when it is happening on a regular basis it is bound to leave you feeling irritable and helpless.

And even though you might know that your child is perfectly safe, it is still your natural parental instinct to want to be able to get up and go to console and comfort your child.

Sleep is very important, and night terrors in children can cause you endless lost sleep, in fact a good night's sleep is essential for you so you can awaken the next day feeling refreshed and energized so you and your partner can be at your peak best in order for you to function at your best at work, doing your household chores and bringing up your children.

Trying to combine the tasks of bringing up your children with your work or your other daily commitments and chores is hard enough as it is, without the added extra pressure and stress of being constantly woken up at night, only to be left feeling powerless and frustrated yet again.

It can also be very hard to unwind and get relaxed enough to drop straight back off to sleep after each nigh time terror disturbance, because of all the stress and adrenaline, which are not a very good combination for getting back to sleep.

It is also important for your child's early development to get a good quality night's sleep and although children who have them do not hurt themselves, when they're having them to do slip into what's described as a bad sleep frequency.

Knowing the difference between night terrors and nightmares

If you're a bit unsure of whether or not your child is having nightmares or time terrors, then it is first important to learn the difference between night terrors and the more common nightmares.

To start with, nightmares are a lot more common than night time terrors and most kids will experience nightmares at some point. Another difference is, nightmares tend to start when the child is a little bit older.

The big difference between nightmares and night time terrors are, when a young child is having bad and vivid nightmares, then they will usually fully awake feeling a bit panicky and a little bit upset and frightened.

They will be able to describe and recall what was happening in their nightmare, like they might tell you that they were being chased by a creature or they saw a monster.

After giving them a little bit of reassurance and comfort and once you have let them know it was just a nightmare and they are perfectly safe, they will quickly drift back off to sleep.

However, if they are having night terrors, then things will be much different. For a start, in normal sleep, what happens is, our brains switch off our ability to move so we instinctively know how to keep our body, calm when we dream, otherwise it would be chaos for us, if our body reacted to our dream reality.

With children's nigh time terrors, this pattern gets broken up and even though the child's mind is still classed as being asleep, the part of the brain that controls the body is actually in the waking state, so their mind is in a dream like state and their body switches to the waking state.

This means, when a child is having night time terrors even though they are not usually in their awakened state, their body is in wake mode and it is physically responding to the night time terror.

This can mean that, they will yell, cry and scream and their body will act out the movements of the night time terror such as thrashing about, they can also act a bit aggressive and they can appear to be nasty, a bit like they would if they were having a temper tantrum.

These tantrums can be very disturbing for the parents as they watch helplessly on as their child appears to be in what looks like some sort of state.

In some cases the child can actually get up out of bed and start walking about, which is similar to somebody sleep walking.

To further add to the confusion, because the child's eyes can be open and they will sometimes come across and behave as if they are conscious, aware and fully awake, this can be confusing for the parent, and some parents may think that their child is just playing up and misbehaving.

The confusion, can even cause you to tell your child off or you maybe even discipline them the next day, especially if they have only just started having their terrors.

The trouble is, if your child is having a night terror, then they themselves will be confused to what they have done wrong, because they will have no recollection of what happened.

The next morning when your child does wake up, because they will have no recollection of what happened during the night, if you do ask them about it or tell them off, they won't have a clue to what you're on about, and if they cannot remember anything about it, then this is usually an indication that they had a night terror.

This is why it can be so upsetting for you, the parent, because all you want to do, is to console and comfort your child when they are in distress, but because your child is still actually asleep and none responsive, you cannot comfort and reassure them.

Although your child might not actually be awake, all the yelling and screaming is going to take its toll on you, the parent, especially if you have to go through this routine on a regular nightly basis.

All the noise and commotion, will not only wake you up, it will probably leave you feeling tired and exhausted, which is not good for your overall well-being night after night, and it is not the ideal preparation for the next day.

Apart from being woken up, some of the yelling and crying can get loud, which is bound to put a lot of unwanted stress and pressure on you, not to mention it will probably wake up everybody else in the house and even the  in some situations.

Most children will eventually grow out of their night time terrors, however, as far as the parents are concerned, they really need some immediate help to stop their children having them, so they themselves can return to a good quality and peaceful night's sleep as soon as possible.

Because the longer they carry on for, then the greater the stress and strain it will put on you, you will probably still be recovering from the sleepless nights you endured in the early stages of your baby's life, so the last thing you want is to return back to being woken up in the middle of the night again.

There has not been a lot of research into children's night time terrors, so most parents are not quite sure what to do to stop them, however there are things available that can help you to gradually stop them. Often they will come in clusters.

Nobody is absolutely sure the exact reason why children suffer with these terror nightmares, some experts think it is genetic whilst others think it has something to do with having an overactive nervous system response.

Often children's night terrors will come in clusters and although nobody knows the exact reasons for them, it is thought that bad sleep is partly responsible, so it is important that your child gets what is described as sleep.

Things that can contribute to bad sleep child has been a lot experiencing worry, stress or anxiety, especially if they have just started pre-school or they are being teased or bullied.

So it can pay to talk to them about their worries and concerns. Some believe that certain medications may be partly responsible.

A good loving family life, where your child feels wanted, safe and secure will do wonders for their emotional state, avoiding too many stimulants, especially late at night, such as too much sugar, caffeine and even some of the food sweeteners such as aspartame.

Getting your child into a good bedtime routine as well as avoiding too many scary stories, TV programs or scary films, because even some innocent cartoons about monsters and ghost can play on your child's mind.

Trying to wake up your child or trying to talk or snap them out of this state, is not always recommended because in some cases it can actually extend the duration of your child's night time terror.

Although there is no danger to your child, for your own sake and your own well-being, you want to put and end to your child's night time terrors so you can return back to a peaceful night's sleep once more.

There are effective treatments to help you stop your child's night time terrors, and they both work on the same principal, the only difference is one is, manual that you can do yourself, whilst the other is a specially designed little device, that does all the work for you.

The technique that you can do yourself is called scheduled awakening. What you have to do is, start to write down and record the times your child would normally have their night time terrors.

Then, once you have recorded all the times, wake your child up somewhere around, 15 to 30 minutes before the

Although the scheduled awakening technique works, it does still mean you have to set your alarm clock to go off, then you will have to get up and wake up your child, meaning it's still going to disturb your sleeping patterns for a while.

Lully Sleep Guardian - Proven for Night Terrors, is a small digital device that you log in the data of your child's night time terrors, then you place it under your child's mattress.

The Lully Sleep Guardian, once programmed, will find the right time to partly awaken your child, it will then gently vibrate a few minutes before your child's scheduled terrors, which is just enough to interrupt and prevent them slipping into the bad sleep, that triggers the night terrors, but it is not enough to fully wake them up.
The Lully Sleep Guardian, can help you and your child get an undisturbed, peaceful and restful sleep, leaving both the parents and child feeling more energized and alert, thus, reducing tiredness and allowing your mind and body to function better.
Tweet 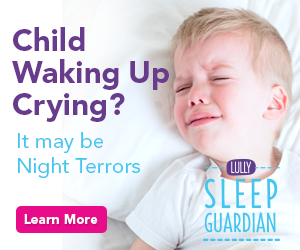 Stop fighting with your thoughts and learn how to quieten them

Worrying can effect your health and quality of life